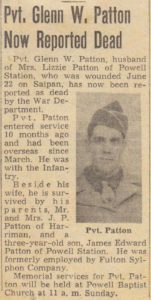 of Mrs. Lizzie Patton of Powell
Station, who was wounded June
22 on Saipan, has now been reported
as dead by the War Department.

Pvt. Patton, entered service 10
months ago and had been overseas
since March. He was with the
Infantry.

Beside his wife, he is survived by
his parents, Mr. and Mrs. J. P.
Patton of Harriman, and a three-
year-old son Janes Edward Patton
of Powell Station. He was formerly
employed by Fulton Sylphon Company.

Memorial services for Pvt. Patton
will be held at Powell Baptist
Church at 11 a. m. Sunday.

Special thanks to Matthew Clark for sharing this newspaper clipping.

This entry was posted in History, Military, Newspaper. Bookmark the permalink.