Before Tennessee became the sixteenth state of the Union, the land which became the Powell Station community was part of Hawkins County, North Carolina.

Because of its over-extended boundaries across the Appalachian range of mountains and its problems in trying to govern the independent-minded citizens across the mountains, North Carolina gave a deed of cession to the Congress of the United States in the latter part of the 1780s. This gift to the federal government was an attempt to secure federal protection for the territory. Apparently no one in Washington became enthusiastic about the gift and refused to even acknowledge it for approximately four or five years. The “Territory of the United States South-West of the River Ohio” was established when Congress finally accepted the deed of cession and passed a law for the government of this territory on August 7, 1789.

The act passed for governing this territory required President George Washington to appoint suitable officers to carry the territorial government into operation. William Blount of North Carolina received the appointment of Governor and received his commission as Governor of the Territory on August 7, 1790.

Governor Blount decided to make the seat of his government in the area now known as Knoxville. In February 1792 “the new town was laid-off by Col. White, consisting of the necessary streets and 64 lots. In honor of Major-General Henry Knox, the then Secretary of War under President Washington, the new town was called Knoxville.” (Annals of Tennessee, P. 558.)  June 11, 1792, Governor Blount issued an ordinance establishing Knox County.

On June 1, 1796, Tennessee was admitted to the Union as the 16th state. It was the first state to be created out of government territory.

The community of Powell Station (known as Powell since 1949) is located in the northwestern part of Knox County near the Anderson County line. The area is part of the Beaver Creek valley (formerly Beaver Dam Valley) and is bounded by Copper Ridge on the west and Beaver Ridge on the east.

John Menifee (also spelled Menefee and Mansfield in the old North Carolina documents), a Revolutionary War veteran is the first known settler to move into the Powell Station area. He and his father-in-law, Christian Rhodes purchased the land around 1790.  He built a two-story log structure about eighteen by forty-four feet, and it was referred to as Menifee’s Station. It was located near where Emory Road and U.S. Hwy 25W (Clinton Highway) intersect today. 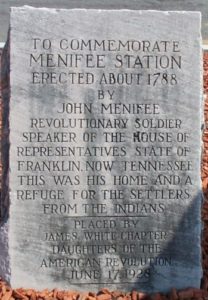 The Bonny Kate Chapter of the Daughters of the American Revolution had a marker located on the site of the old Menifee Fort.

As early as August 12, 1809, action was taken by John Menifee to establish a meeting house which would be “free for ministers of every denomination who are in fellowship with their different societies”. On the above date, John Menifee deeded two acres to seven commissioners or trustees for the purpose of building a non-denomination meeting house. The foundation for this house was started on September 9, 1809, and a log structure was completed about 1812. This was first called Menifee’s Meeting House but later became known as Bell’s Meeting House. The Baptist, Methodist, and Presbyterian faiths were the groups that mainly used this meeting place.

In 1833 the Beaver Creek Cumberland Presbyterian Church was officially founded but continued to have services at Bell’s Meeting House until 1872 when they moved into their own building.

The Methodist Church acquired some property on November 23, 1891. The exact date their church was founded is- not known, but a frame weatherboarded structure of modest size was built. The Baptist congregation at Bell’s Campground moved into their own building in 1929, leaving the Union Church vacant since there were no other denominations holding services there.

Some of the other early churches which were established in an effort to keep pace with the growing community we’re Pleasant Hill Baptist now known as Sharon Baptist (1871), Powell Station Methodist Church (1871), United Brethren (1889), Powell Baptist (now First Baptist Church of Powell) (1889), Glenwood Baptist (1890), and probably others.

This article was originally published in the Glenwood Baptist Church Centennial Celebration Book (1890 – 1990).

This is being re-published by permission of Glenwood Baptist Church, 7212 Central Avenue Pike, Powell, Tennessee 37849.

Note: several modifications have been made from the original transcription of this document to incorporate updated information discovered.

This entry was posted in History. Bookmark the permalink.